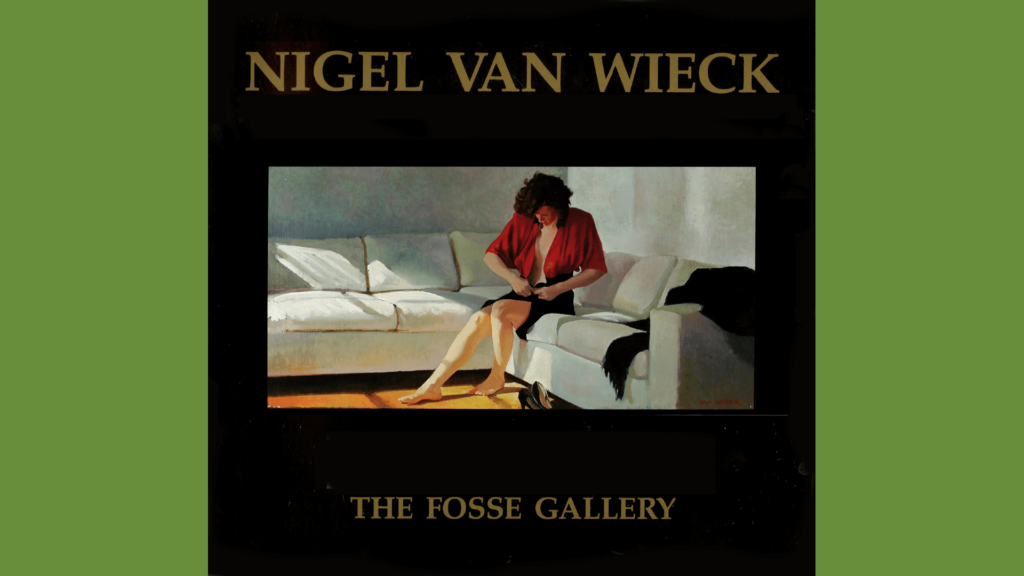 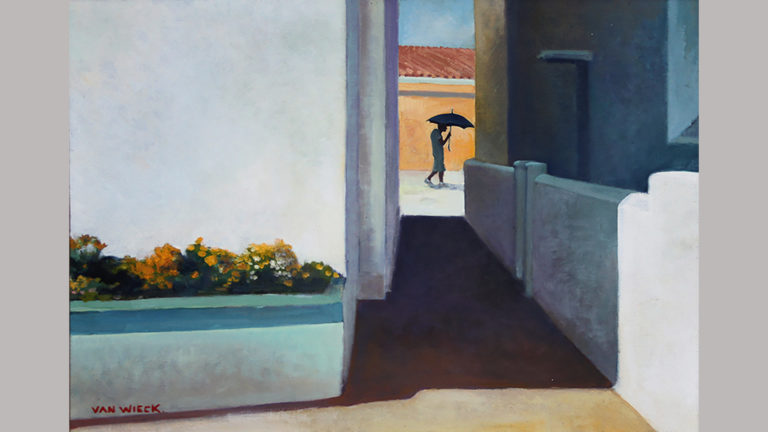 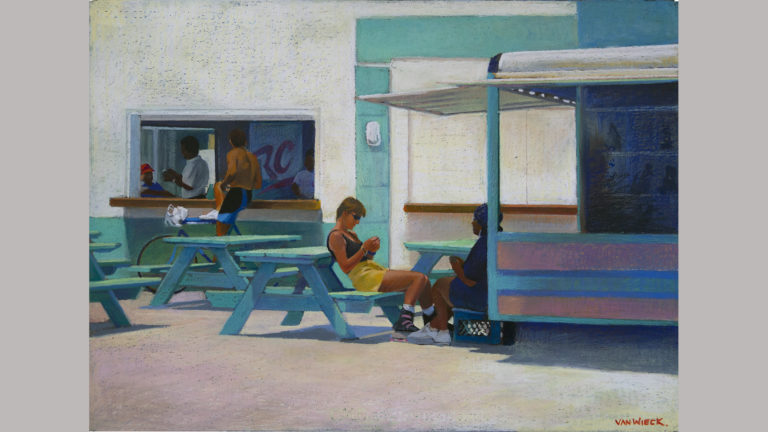 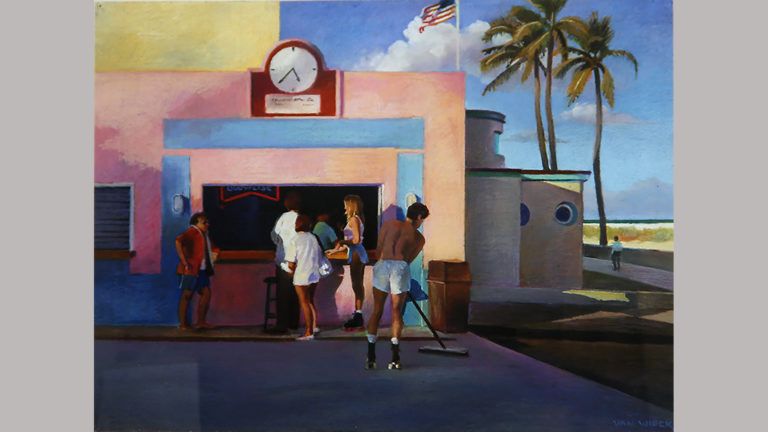 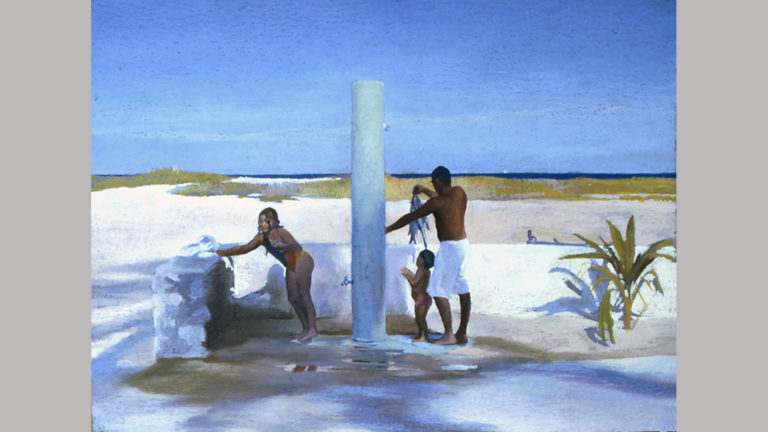 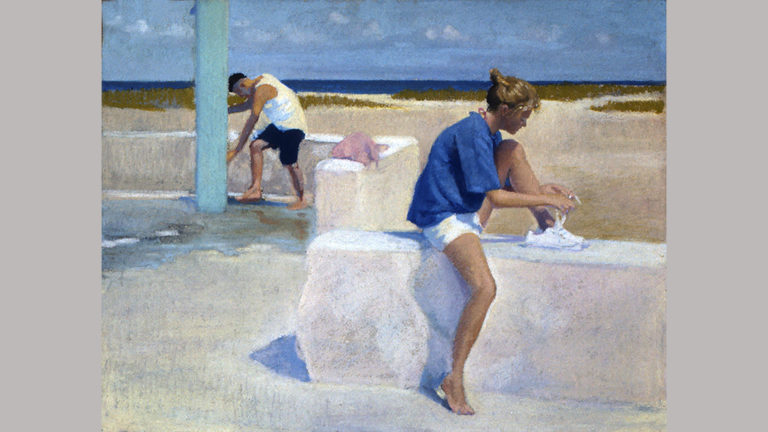 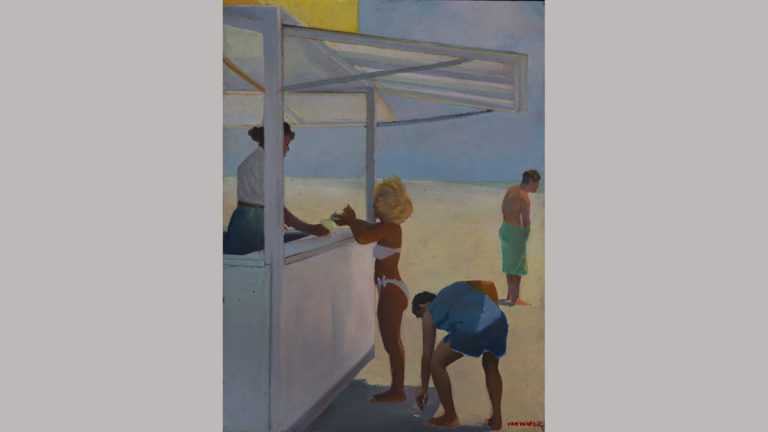 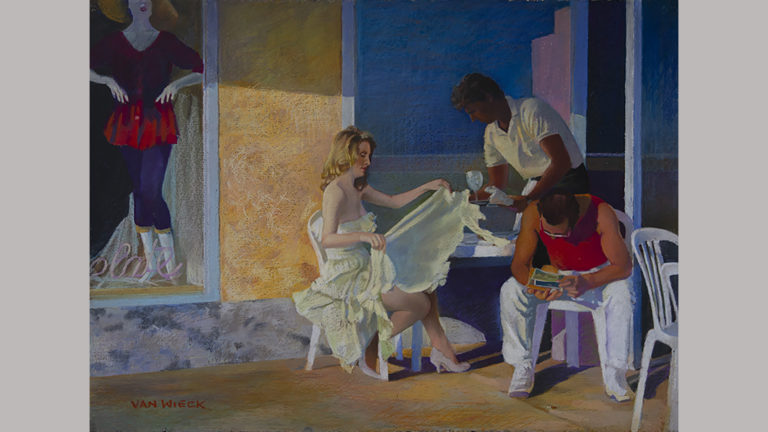 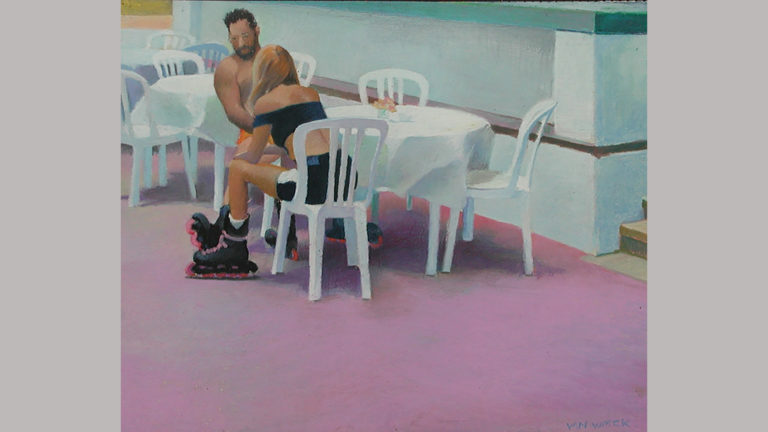 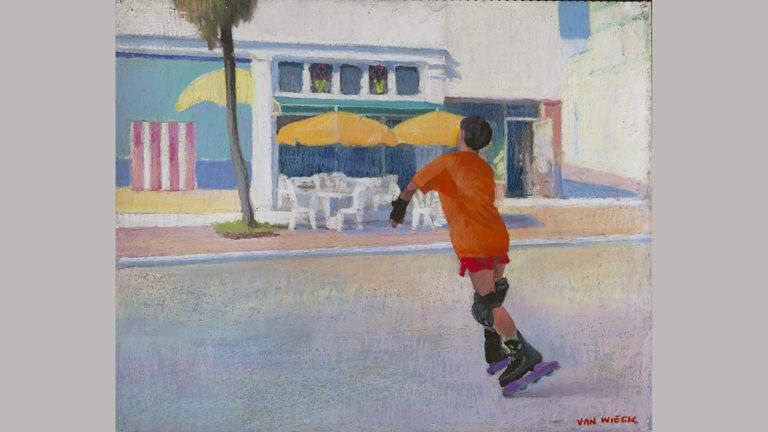 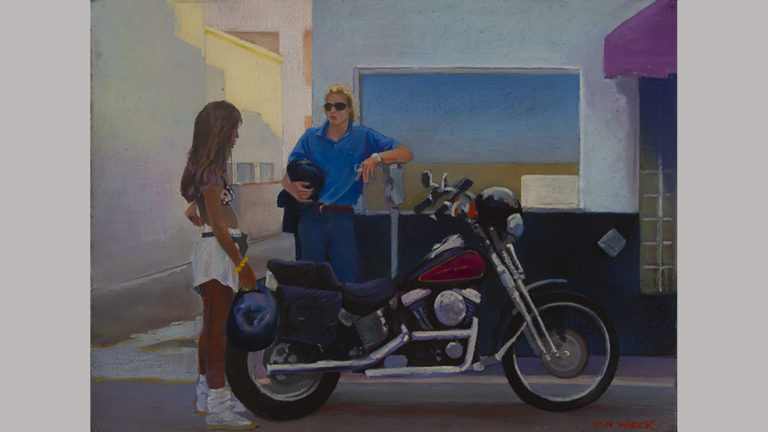 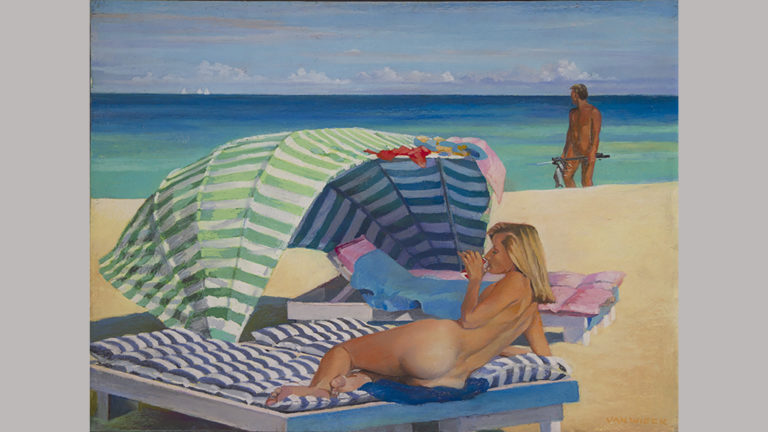 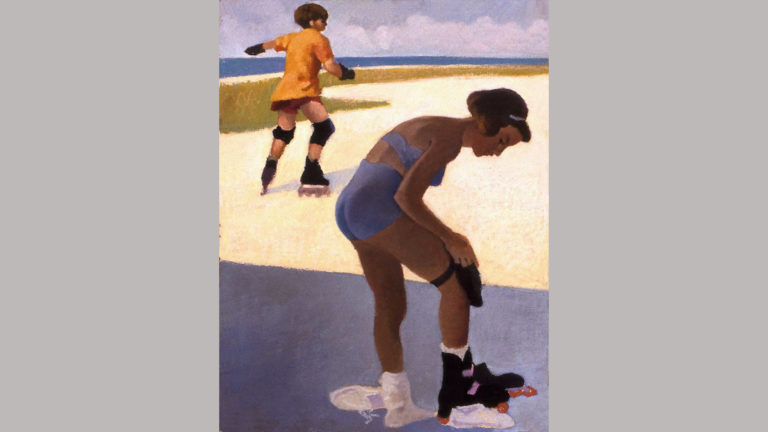 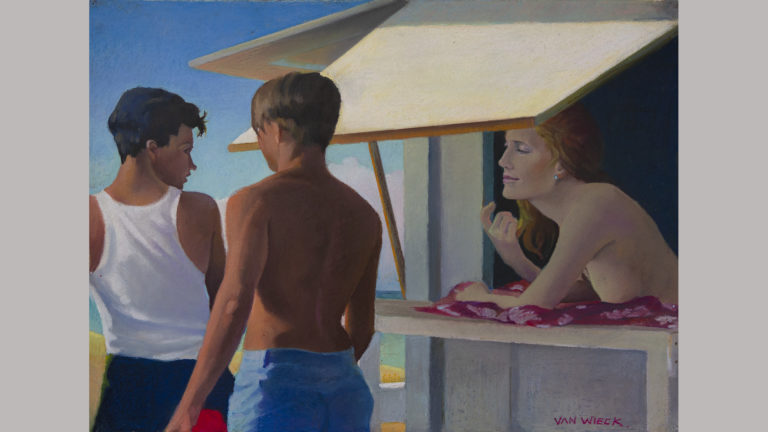 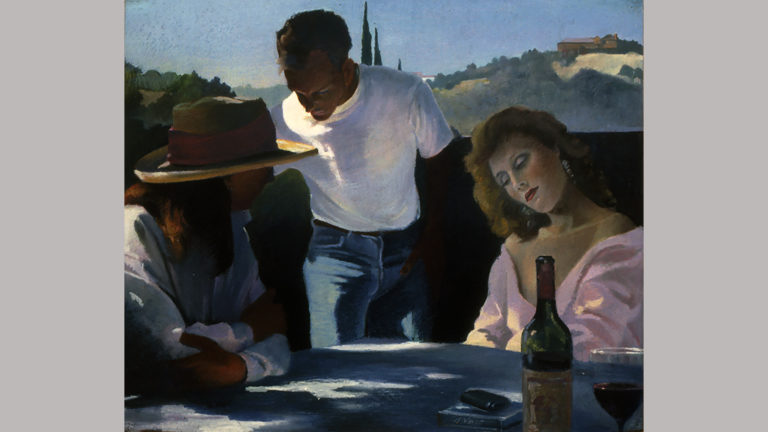 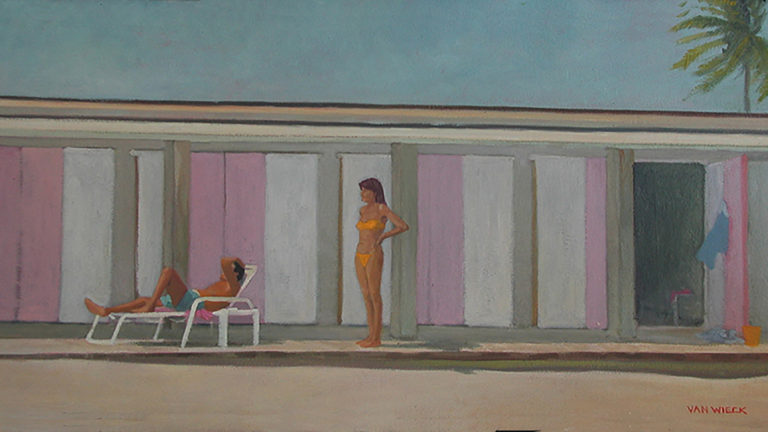 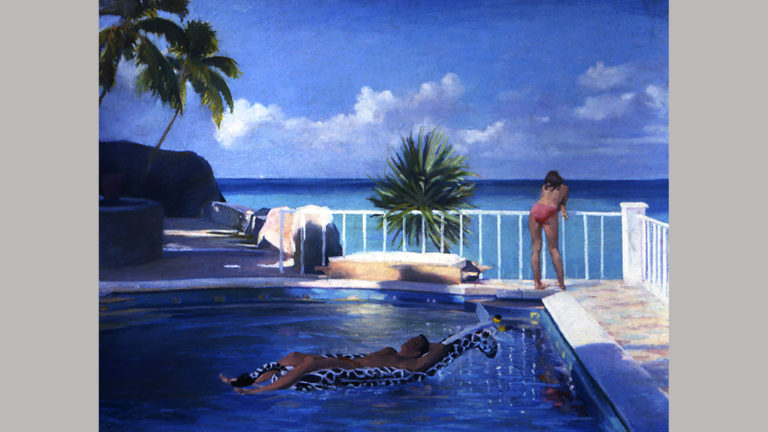 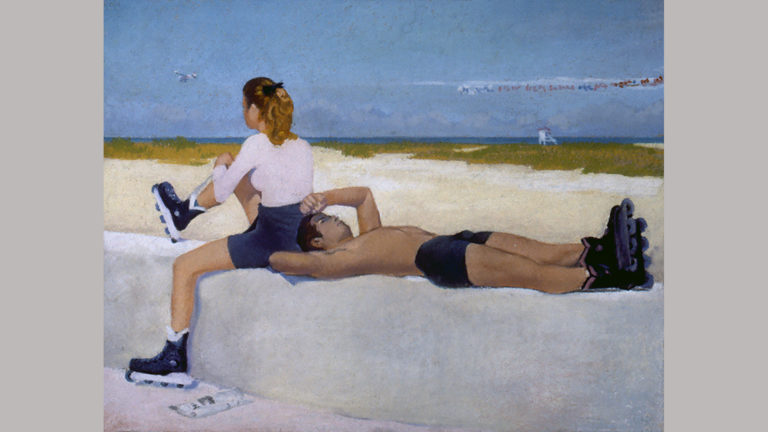 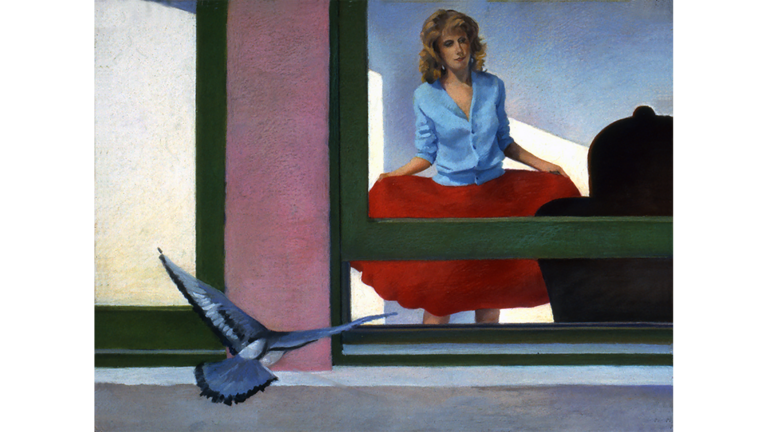 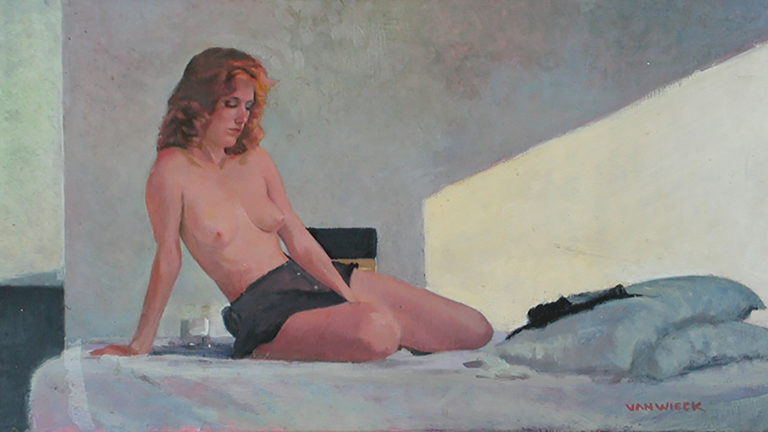 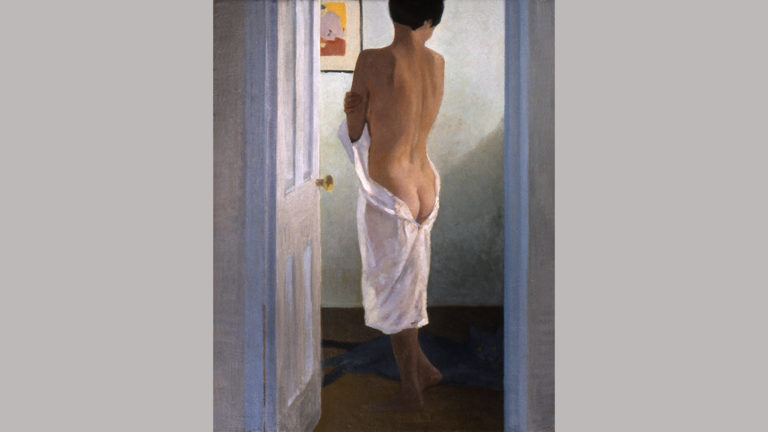 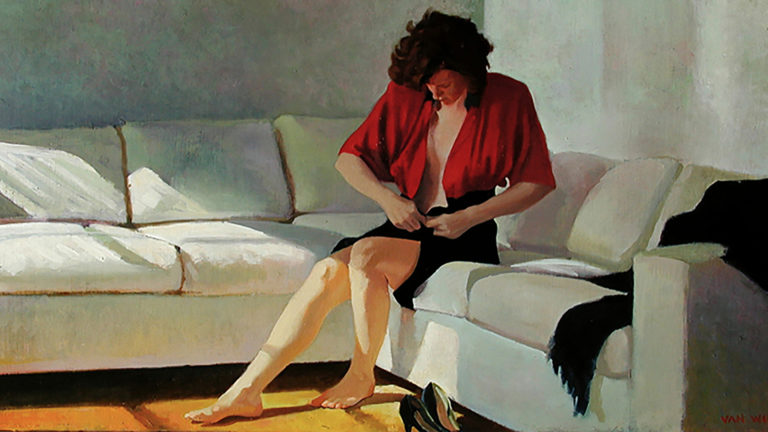 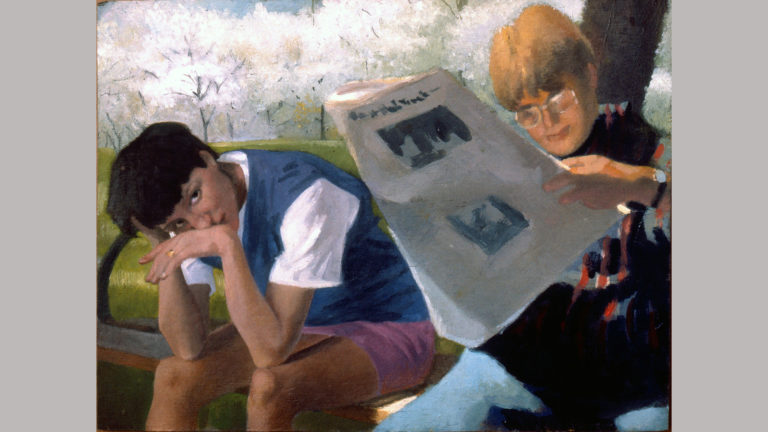 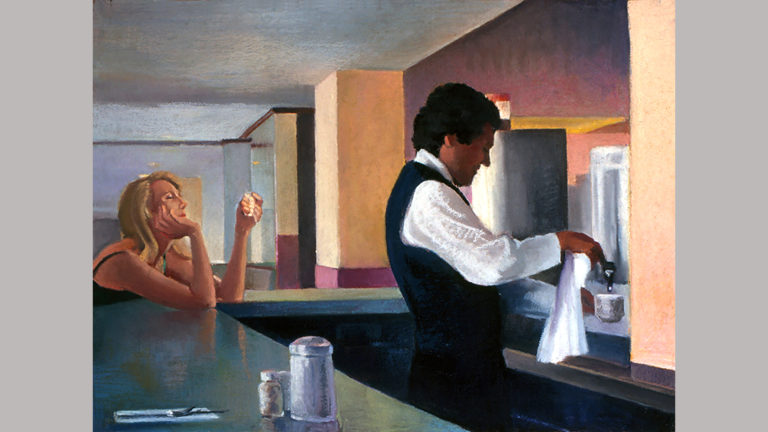 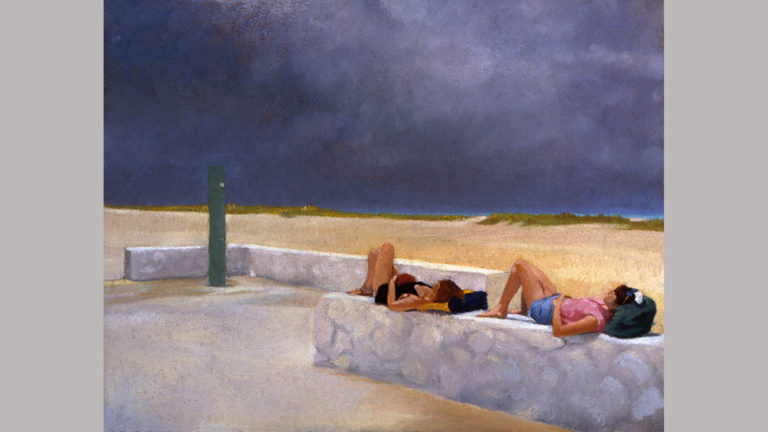 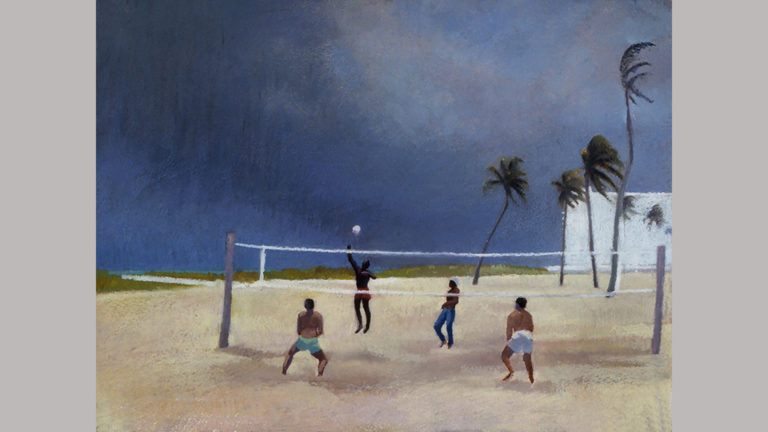 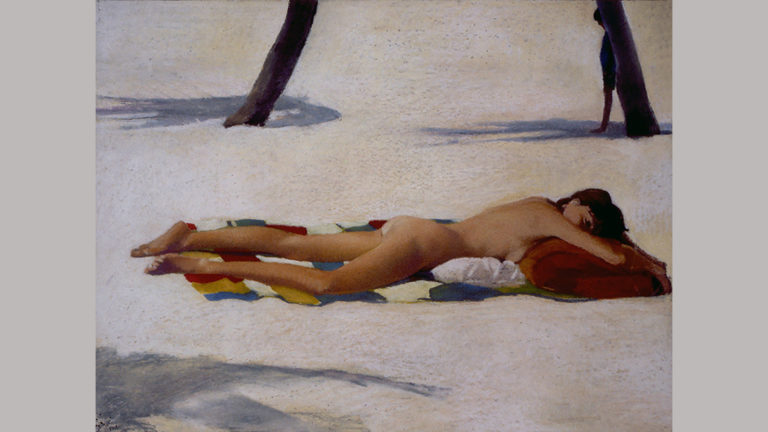 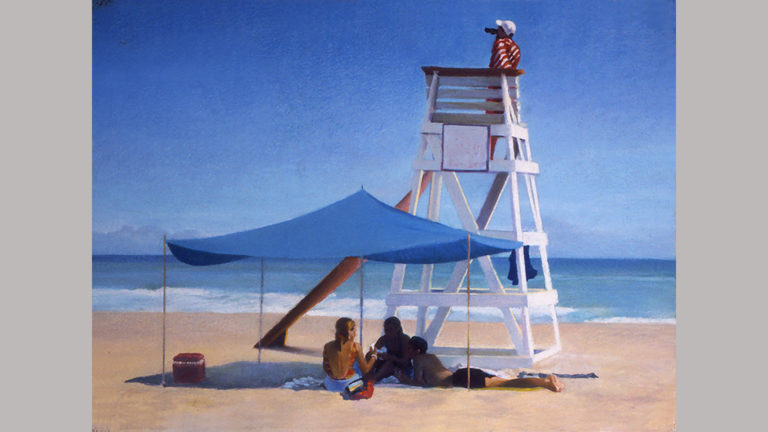 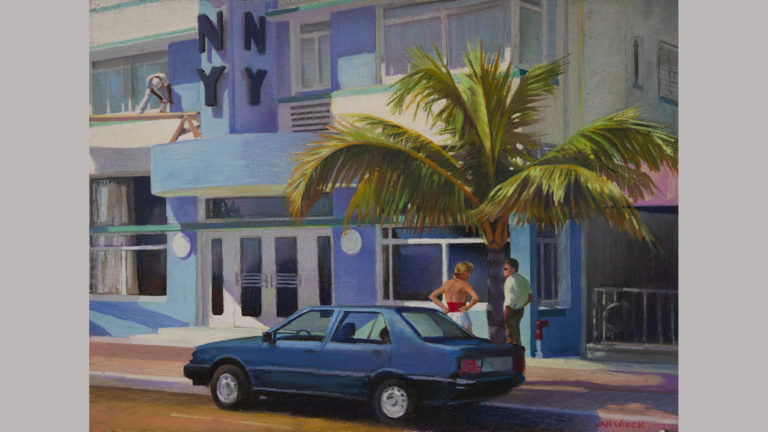 Van Wieck’s new series of pictures of Miami are among his finest works. Many are depiction of people pursuing the pleasures of the day, and at night these groups gather on Ocean Drive, 16 pastel blocks paralleling the deep Atlantic Ocean beach. Tightly lined with restored Art Deco hotels, cafes and restaurants, the drive becomes a carnival of fashion and style ranging from the most elegant Armani to serious grunge.

It takes an artist of Van Wieck’s talent and intellect to bestow clarity on this place and at the same time to describe an underlying reality of unconnectedness.

Van Wieck’s reality is not a new one in American painting. His work, like that of other American painters, documents man’s attempts to find peace in America’s untamed solitary landscapes. In the 19th century Winslow Homer’s sea portraits eloquently captured this struggle. Likewise, Edward Hopper’s solitary figures of the first half of the 20th century reconcile the tension inevitable in the American scene.

Van Wieck’s South Beach is extraordinary for its light, its sense of space and its romanticism. There is light in his brush: he bathes his figures in it adding optimism to an unmistakable feeling of melancholy. His cast of players — the blade skaters, bikers, bathers, couples, children, young women — could exist in any number of beach resorts around the world; they are not portraits but neither are they stereotypes nor metaphors. The viewer’s interest is not merely formal; each picture portrays characters oblivious to their own solitude, thus inviting the viewer to investigate, through the psychological content of the work, the artist’s vision of solitude.

Despite their stillness, Van Wieck’s pictures have a powerful cinematic quality: time is stopped captured-rendering the moment ambiguous in narrative terms. In New Model, it is unclear whether the young woman with tousled dark hair is dressing or undressing. Is it denouement or is it yet to come? The white sofa offers a resting place but it also pulls her in two directions. Van Wieck layers the tension of time and space to create a tight vitality. He portrays Mozart’s observation that in music the rests are as important as the notes.

In Far Away the curved line of the pool embraces a man relaxing on his giraffe raft; leaning over the rail a woman stares out to sea. Have they quarrelled? Do they even know each other? Or are they guests at a mutual friend’s Florida house? Maybe there is no tension between them at all. Van Wieck smiles at the viewer’s confusion because these questions also occur to him.

Children’s Pleasure is one of Van Wieck’s most joyful paintings. In the sun, a young skater dressed in bright red and orange with the sea ahead of him opens his arms. The defining lines of his space suggest the wealth of directions open to him. In the foreground a young woman prepares to join him.

As an ‘outsider’, an Englishman, Van Wieck sees Miami more clearly than most Americans. He observes and interprets, but he makes no judgements. 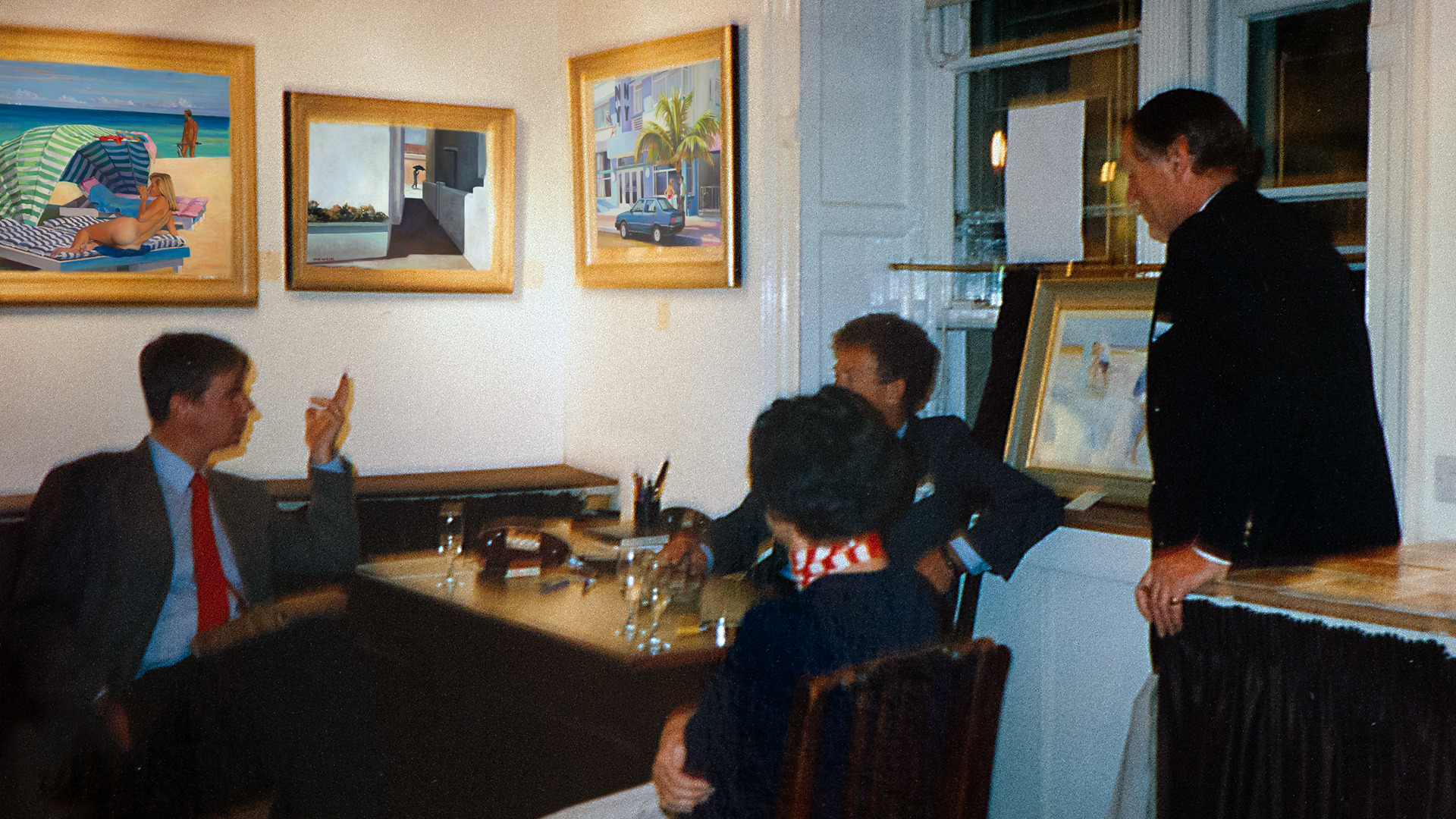