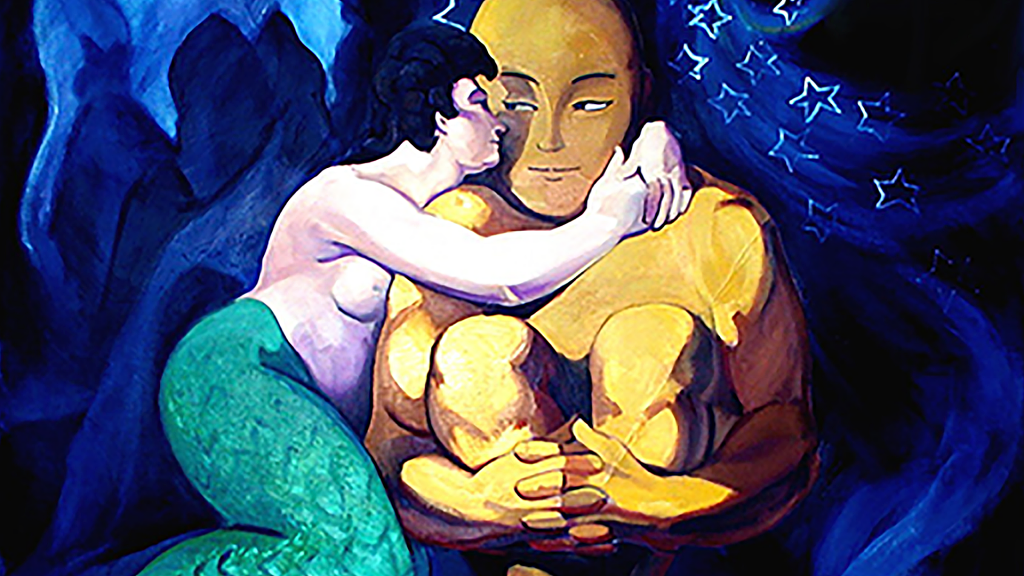 A myth convinces, a proverb has authority, only if it feels impersonal — a given like weather or topography. Though myths, proverbs and cautionary emblems must, of course, originate in individual imaginations, these tropes never fully count until the general culture appropriates them. Or at least that’s how it is in pre-modern cultures. But when politics call social forms into question and society’s dubious structures can no longer support the authority of culture, myths come in for emendation. This started happening in the West during the Romantic period, and it is still going on — not the clever amplification of myth that one sees in Renaissance and Baroque periods, certainly not the prettifications of the Rococo, but a radical reimagining of the culture’s basic images. For the past two centuries, individuals have been insisting on the singular origin of myth.

This leads to a process of re-appropriation, which is proceeding at an extraordinary pace in the work or British painter Nigel Van Wieck. Until very recently, Van Wieck painted closely observed, delicately rendered images of contemporary people and places. Now the airy textures of these earlier works are gone, replaced by statuesque modeling and aggressive, vividly-colored patterns. Where once there were men and women of familiar urban kinds (portrait subjects who, it was clear, would have an informed appreciation of their images), Van Wieck now presents us with, for a few examples, a raging Samson, a falling Icarus, fleshy sirens, a heroic figure of the painter courting gigantic and voluptuous images of his muse, and a variety of unnamed colossi. Against roiling skies and the schematized glowing profiles of such Manhattan landmarks as the Empire State Building, dagger-wielding assailants bend over their victims in poses recalling Caravaggio’s most violent scenarios. The musculature of Van Wieck’s male figure suggests Michelangelo, but only after Blake got done with him.

For a contemporary myth-maker like Van Wieck, the heroes of art history are comparable to heroes of Scripture and the Greek pantheon. He doesn’t play variations on Blake so much as claim the earlier artist for his own, much as he claims Icarus. The result is a singularly powerful reinvention of cultural givens, a body of myth still in the making, that presents life as violent, desperate in its violence and relentlessly sexual in its desperation. In a calm painting like New Moon the male figure must take on the presence of a vividly ocher monument in order to resist the Siren’s seductiveness. Here as elsewhere, the action takes place in a zone of crags and vast skies, a region as open as the Arctic wasteland which nonetheless may be a sunless cavern. Even the sun that defeats the wings of Icarus has a Plutonian rather than solar glow.

The wheatfield of Breaking Cover stands in the light of an ordinary rural day, yet it seems far removed in time. There is a medieval feel to this image of hawk and hare, hunter and hunted, driven into the open by the harvester’s scythe. And this picture’s strategy suggests a pre-modern kind of image making, for it can be seen as a visual proverb — that is, as an emblem of a long-familiar kind — or as an instance of that rather more complex device, allegory. Life, Death and Time (all capitalized by Van Wieck’s surgingly monumental style) preside over the painting, and the entire exhibition as well. Whether myth-maker, spinner of cautionary tales or allegorist, Van Wieck makes it overwhelmingly clear that the large topics of his art are first of all the concern of the solitary — which is to say, modern — individual.